The API Management page can be found under "API".

API versions exists in two different states. The version that is seen in the Development environment is always the current Development version of an API. In all other environments, published versions are shown.

A development version of an API is a version where the linked processes does not have locked down versions. That means that the user can update any process that is a part of the API without taking any additional actions. The development version can also have it's Swagger specification modified. When an API is ready for deployment, a Published version will be created.

When deploying the user can choose to deploy a previously Published version, or create a new Published version from the current Development version. The Deployment dialog allows the user to see which processes will be deployed as well as the Swagger Specification. If a Published version is no longer valid, for example due to a used process being deleted, then it can no longer be Deployed.

FRENDS supports editing imported Swagger Specifications. The Base path of an Swagger Spec can not be changed once it has been imported.

Once a Swagger Specification has been imported, FRENDS can create Processes matching the API operations defined in the specification.

A process generated from an API Specification will contain an API Trigger. The Trigger will give the process access to all expected variables passed to the endpoint, and will even cast them to the correct type.

A generated process will also come with pre-generated responses. For example, if an endpoint is defined to return a Pet object on success and an Error object otherwise, then the process will contain both of these responses upon creation, complete will expected parameters (as long as Swagger Specification contains all required information, of course). Whatever happens in between the trigger and the responses is up to the user.

Note that some settings that are defined in the Swagger specification are set on a process level. Supported schemas as well as Authentication will be set by the API Trigger, and might differ from what has been defined in the Specification.

Once Api is created the basepath cannot be edited, because all operation URIs are based on it. Version number can be added to basepath, if multiple versions are needed. The benefit of having e.g. different basepaths for v1 and v2 of the APIs is that then you can have both deployed in the same environment.

FRENDS will add "api" to the basepath upon save, e.g. example.com/api/foo/bar/v3, if it doesn't have it already. The /api prefix is because you can have simple HTTP triggers as well, the API triggers have their own reserved prefix, so there are no route conflicts, e.g. with HTTP trigger with route /foo/bar and API trigger /api/foo/bar

A process that has been created from an API Operation is linked to the API Specification that created it. That means the process will be deployed when the API is deployed, and the API Deployment will make sure the right version of that process is deployed.

If you wish to unlink a process from an API, to example create a new process for that API Operation, simply click "Unlink Process". An unlinked process can easily be re-linked to an API. 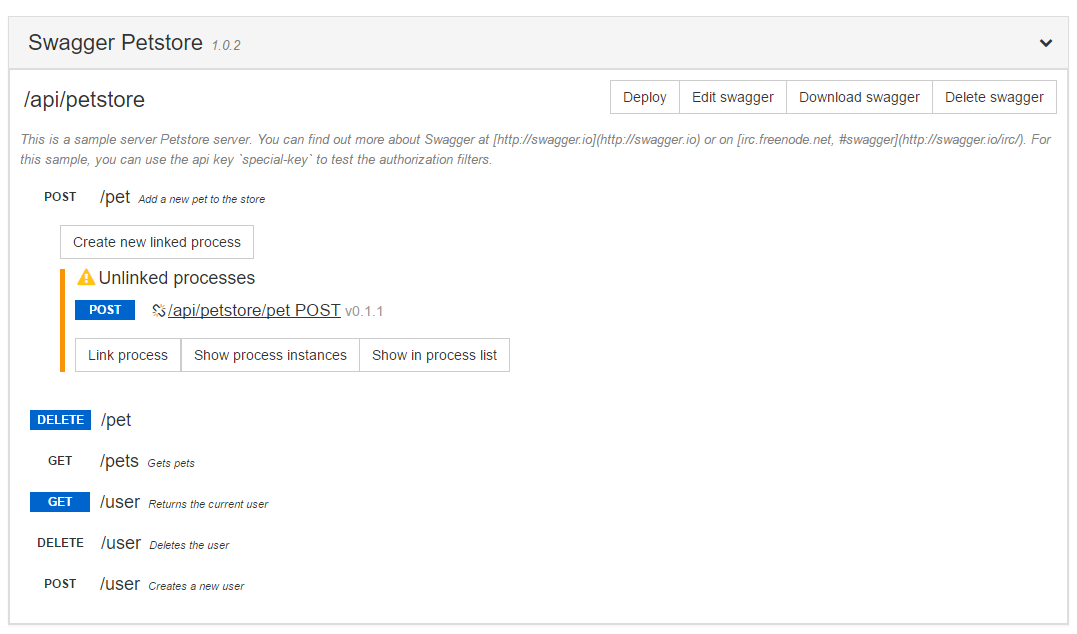 FRENDS detects when a Swagger Operation has changed for a Process with an API Trigger. This can happen when importing a new version of a Specification or when editing the Swagger Specification - for example an operation can gain an extra parameter, or there's a schema definition change. 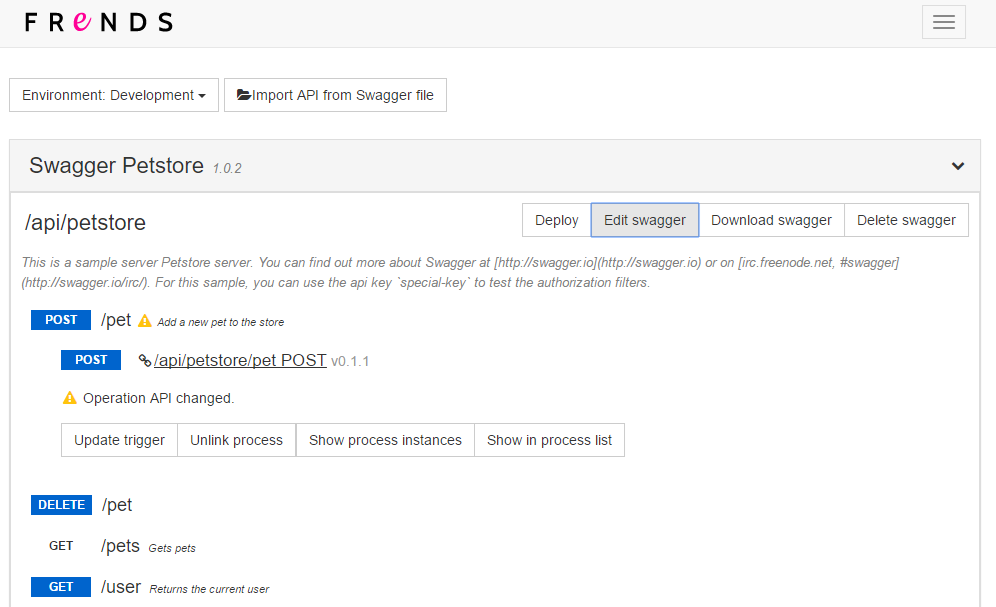 FRENDS offer the functionality to update the Process' API trigger to match the new Swagger Specification. Note that this only updates the trigger- if the expected responses have changed, then it's up to the user to modify those.

In case an operation is removed entirely, then the process gets unlinked from the Specification. API processes that are unlinked from an API are still visible in the view. 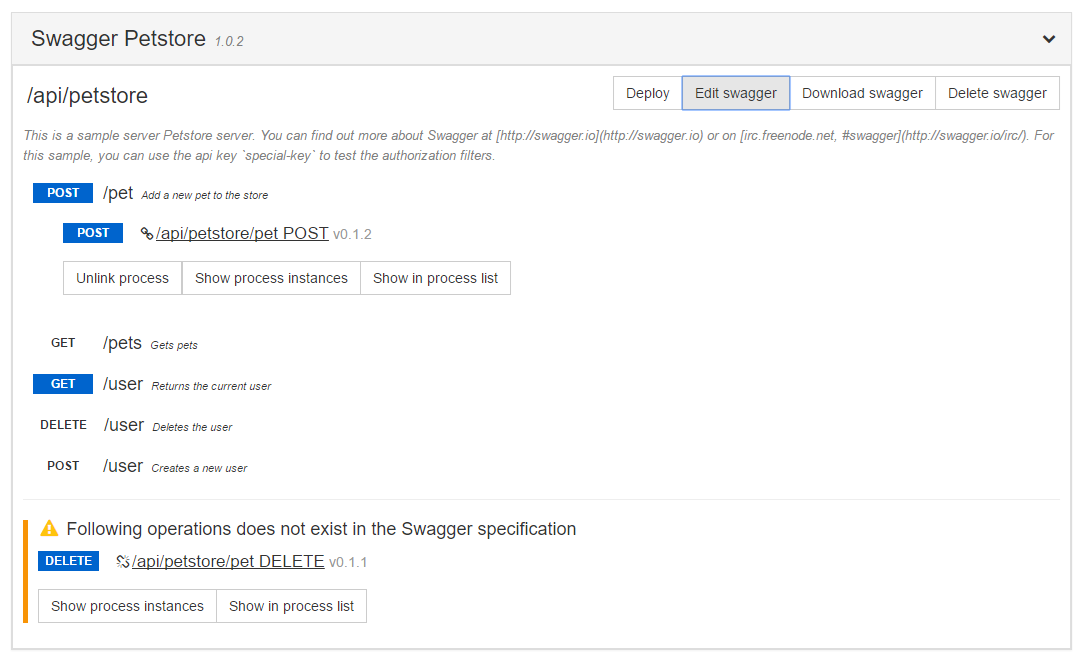 Note that the behavior of these two elements are different.

A Return will end the process in a success state, and will continue executing if used in a Scope or loop.

If you need to send out an error response but do not want the behavior that comes with a Throw element just add a Return element with the same settings as the Throw. 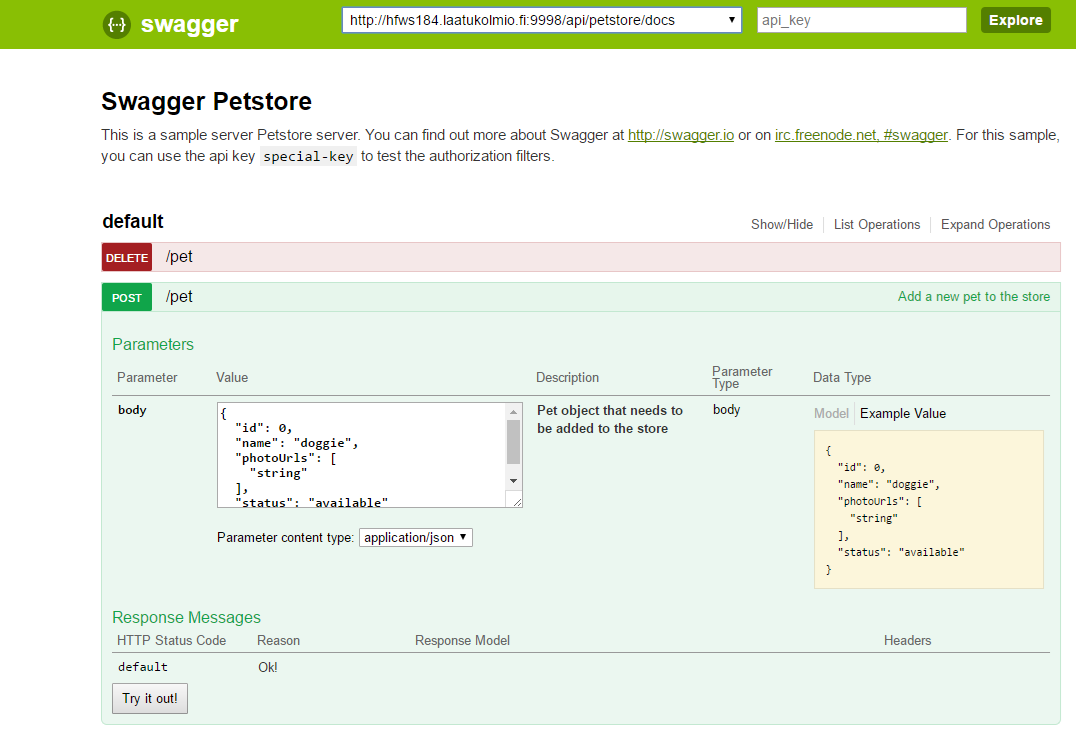