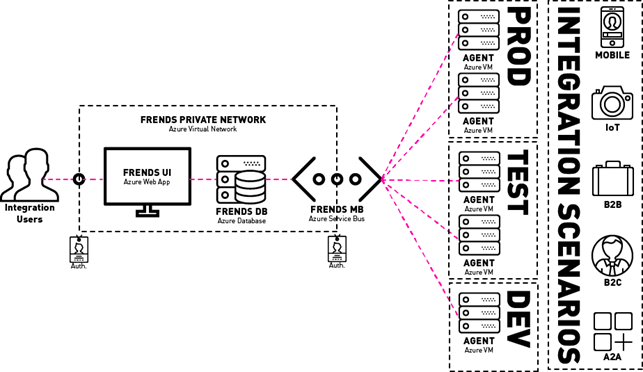 When developing processes or integration flows in FRENDS you will need to deploy the newly created integration flows to an Agent group in order for them to be executed. A common use case for this is the traditional path of:

FRENDS enforces this best practice with the deployment and Environment architecture.

The deployment of a Process is done from the FRENDS UI Process View by selecting Processes to be deployed and selecting the "Deploy Processes to Agent group" action found in the Actions dropdown menu. You will also be required to choose which version of a Process you wish to deploy and into which Agent group. This same method is also used to rollback previous deployments by simply selecting an older version.

When deploying a Process, FRENDS will automatically send a notification to the Agents in the target Agent group which will cause them download and take the selected version of that Process into use. This way the whole deployment process is automated with a single click of a button.

Note that Triggers will be also activated by default when deploying Processes to another Agent group. You can choose not to activate the Processes by unchecking the option in the deploy dialog during deployment.